The Zambian mining Industry was in private hands for just over 40 years from the late 1920’s.  During this period consistent investment in Exploration, Mine development, Mining and processing facilities construction resulted in copper production going from almost zero to over 750,000 tonnes with 64,000 direct jobs being created.  The Mining industry was nationalised in 1972/73 and remained in State hands for 24 years.  At the end of this period annual copper production levels came down to around 250,000 tonnes and employment levels had reduced to 22,000 jobs.

The mining industry was privatised. The process spanned a period of three years from 1997 to 2000.  Between 2000 and 2014, the new investors had invested over 10 billion US Dollars in the Mining Industry for Exploration, Mine and processing facilities development, refurbishment of dilapidated mining and processing facilities.  This resulted in deepening of mine shafts, extension of open pits, sinking of new mine shafts, starting new green field integrated mining projects, construction of modern environmentally friendly processing facilities and opening up of new mining frontiers away from the traditional Copperbelt of Zambia into the North Western province. This has resulted in copper production levels reaching over 760 000 tonnes in 2013 and the projection for 2014 is 800,000 tonnes with over 90,000 direct jobs being secured/created.

According to the ICMM (International Council on Mining and Metals) report quoting submissions from the Zambia Revenue authority, between the periods 1997 to 2006, the total contribution of the Mining Industry as a percentage of all tax collections by ZRA was averaging around 5%.  As the investments started maturing the levels started increasing progressively until the percentage reached a high of 44% in 2011 and slightly dropped to 32% in 2012.  Mineral royalties and company tax make up the bulky of the mineral taxes.  Table below shows the detailed data from the ICMM report. 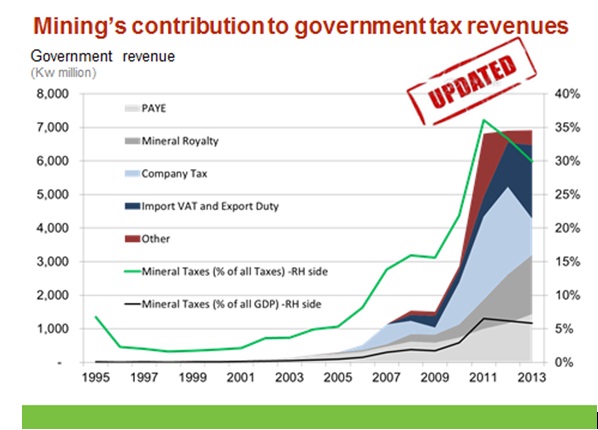 The latest EITI report shows that mining revenue in 2011 nearly doubled to Kw7.7 bn compared to Kw3.7bn revenue collected in 2012. This represented over 30% contribution to Government revenue in the year under consideration.  In addition to the increase in revenue, the EITI report has shown a decrease in the discrepancy between mining company payments and Government receipts. The net discrepancies were ZMW 12 billion in 2008; ZMW 31.4 million in 2009 and 8.8 million in 2010.

According to Wood Mackenzie (An international, energy, metals and mining research consultancy group that supplies comprehensive data, written analysis and consultancy advice) Zambia’s overall effective tax rate on Mining companies is about 45% as shown in the graph below.  This is one of the highest tax rates in the world.  Even our neighbours DRC have a much lower rate at 25%. This is a major deciding factor for Foreign Direct Investment decisions. 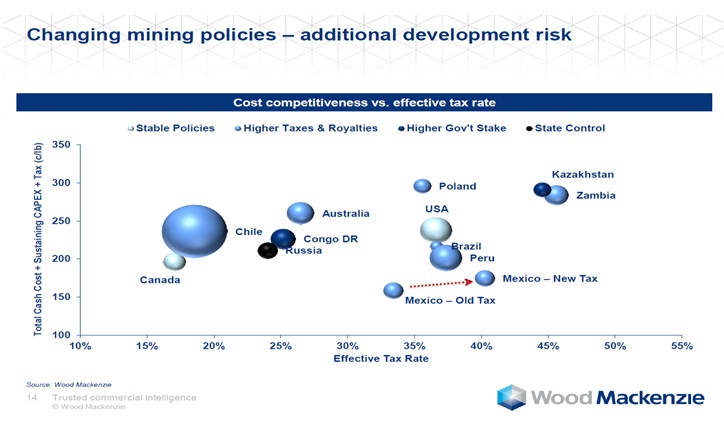 Audits done on the Mining Companies.

Various statutory audits are done on the Mines.  Firstly by independent internationally recognised accounting firms which audit the books of accounts.  ZRA conduct annual and ad hoc audits on the mines and these look at mine to metal production and revenue streams thereto.  Additional audits are conducted by the Office of the Auditor General on Government agencies which are overseers of Mining operations such as Ministry of Mines, Energy and Water development Mines Safety Department, Geological survey and Zambia Environmental Management Agency.

Furthermore in order to show transparency and accountability in the extraction of Zambia’s natural resources, The Chamber of Mines joined the Zambia Extractive Industries Transparency Initiative, ZEITI in 2008, and in 2012, Zambia was declared EITI compliant. Being declared EITI compliant implies that Zambia has put in place effective processes for enhancing transparency and accountability in the mining sector.

In addition to all these audits, ZRA in early 2013 set up the Mineral Value Chain Monitoring Project.  The project was responsible for carrying out an independent assessment and verification of the levels of production in the entire mining industry in Zambia and for reviewing, developing and implementing a mechanism for monitoring the exports of these minerals.  All the mining companies fully supported this initiative and cooperated with the whole exercise.  The findings of this high level audit have not been shared with the Mining companies so that any gaps found can be addressed.

In the Mining business, Exploration is a prerequisite and this can take 5 to 10 year (without a guarantee of finding something) , Mine development another 5 to 10 years, Construction of Mine infrastructure and processing facilities another 5 to 10 years and closure anything from 2 to 20 years depending on the project environmental activities.  This is a long time and requires a stable investment climate with fiscal policies which are clear, competitive and stable.   See graph below.

This Rule was introduced in 1997 and was meant to encourage exporters. By allowing an exporter to reclaim input from value-addition, the Rule would reduce the exporter’s costs and in turn make the product more competitive on international markets. Mining companies that export their products to the international metal markets must meet the following requirements before a claim of the VAT is refunded by ZRA.

It is the requirement that proof of arrival of the exported commodities in the receiving country is made which is impractical.  Almost all the metal sales into the international market is to trading houses which are multinational.  Products once received by the traders can be split, can change hands several times and may even be changed into different products before reaching the final point of consumption.  It is impossible for the seller/exporter to track the products and obtain documentation from the receiving customs jurisdiction to confirm that the products did reach that destination or destinations.

The non-payment of the withheld VAT refunds have had and continue to have a major adverse impact on the operations of the Mining companies.  Cash flows are seriously constrained and to keep operations going the following undesirable actions have had to be taken:

The effects of these actions are already being felt and in the medium to long term, there will be a negative impact on:

Our sincere appeal is that VAT rule 18 be looked at urgently and resolved and the VAT refunds made to all exporters so that we can continue to progress on the path of increasing mining and manufacturing production to sustain and continue to create jobs.  The Zambian Mining Industry will continue to be the Engine of the Zambian economy for a long time to come.  This industry needs to be nurtured so that we continue to generate revenues required to diverse our economy.